Fox Motors is excited to announce that Josh Nelson will be joining our organization as the coach for our U18 midget major team. Josh was born in Morah, Minnesota and grew up in Wisconsin along with his brother Casey who is currently in the AHL playing for the Rochester Americans. Josh played for four years at Minnesota State University as a defenseman. Injuries caused him to miss just about half of his senior season, but Josh’s love for hockey stayed strong and after his time at Mankato he started his coaching career.

He started his coaching in the North American Hockey League with the Wichita Falls Wildcats as an assistant coach for the 2015-2016 season. He took the head coaching position in the middle of the 2016-2017 season. After his stint in Wichita Falls, he joined the Muskegon Lumberjacks where he spent four seasons as an assistant coach. Along with coaching the U18s, Josh will also be heavily involved with TPH and available for private skills lessons throughout the year. Hockey Directors Mike Slobodnik and Travis Richards are really excited about Josh joining the program. When asked about what Josh will bring to Fox Motors, Travis said, “it’s great to have someone with as much experience coaching high level hockey as Josh for a group as important as the U18s. He knows what it takes to play at that next level firsthand, and most kids don’t have the luxury of being coached by a guy like that.” When Mike was asked the same question, he said, “having someone who wants to be involved in every aspect of what Fox Motors has to offer is great. Along with the high-level knowledge he brings to the older groups, he’ll also be able to teach our younger players super valuable tips and skills to get them going in the right direction at a very young age.” All in all, we’re very excited about Josh joining our team of coaches and what he will bring to the table. 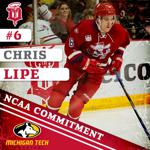 Chris Lipe, of Rockford Michigan, Currently playing for the 2018-19 Dubuque Fighting Saints of the USHL, commits to Michigan Tech University. Chris was a Fox Motors Hockey Club product during his youth career before departing for Kenia River of the NAHL. After 1 season there Chris has spent the last two seasons in the USHL with the Des Moines Buccaneers & the Dubuque Fighting Saints. Congrats Chris!

Trevor Adams, of Muskegon Michigan, currently a forward for the Salmon Arm Silverbacks of the BCHL commits to Air Force Academy. Trevor played a season of U16 & U18 AAA here at Fox Motors Hockey Club.

PRIMO SELF COMMITS TO MIAMI OHIO

Primo Self of East Grand Rapids, MI and player on the Fox Motors Hockey Club AAA Midget Minor U16 team, has commited to Miami of Ohio for College Hockey.  Congratulations Primo!

Hatten Commits to Miami of Ohio

Bryce Hatten, a 97 born defenseman who skated with the Michigan Nationals the past three seasons, has formally committed to play college hockey with Miami of Ohio.  Hatten becomes the first Nationals player in it's short history to receive a Division 1 college commitment.  Hatten played Bantam Major and two seasons of Midget Minor. This upcoming season he will be skating with the Cedar Rapids Roughriders of the USHL.  The Michigan Nationals oranization would like to congratulate Bryce on this incredible accomplishment.

Congratulations to Cam Orchard, Eric Schuch, and Brendan Graham for being selected as three of the top 20 1998 birthyears in the state of Michigan.  Bryce Hatten was selected in the Mid-Am District as a 1997 birth year. They now will be heading to New York for the National Camp hosted by USA Hockey.

Michigan Nationals are proud to announce Tom Hofman as the Nationals 14 U Girls Coach for the Spring and fall seasons.  Tom is the Womens coach for Davenport University and we are excited to have him in our journey to help grow the girls game.  He will be joined by Emily Neitzel who played AAA hockey in Detroit as a youth and helped coach in the Meijer State games.

Check out the October edition of the Michigan Hockey magazine which features a story about Coach Mike Knuble and the Michigan Nationals Hockey Club. 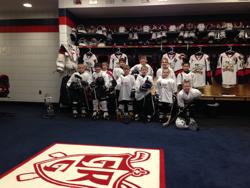 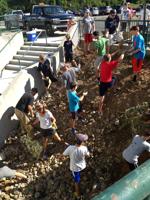 "Southside Arena held its 1st Annual Clean Up Day on Saturday, August 24th.  More than 50 volunteers, including players and families, brought their own tools and supplies to help clean out the parking lot rock islands. The islands needed the rocks removed, weeds pulled, landscaping cloth laid down and the rocks replaced back into the islands. Rocks were also removed from the entry way and distributed to all the other islands.  Our volunteers worked hard from 9am-2pm, in the heat, to help complete the task. This was not an easy job - especially pulling the rocks from the entryway - we saw a lot of teamwork for that job!  We are so very THANKFUL for all the help we received to get the job done!!  We appreciate the fact that families took time out of their Saturday to volunteer and stayed to the very end to help clean up - making sure every island was done!  Volunteers ended their workday with an amazing grilled lunch and cool drink.  Thank you again for caring about Southside Arena!!"